NOTE: WHEN YOU ARE READING THIS, NHB HAD ALREADY REPLACED THE  WRONG LOGO ON THE ‘WHAT’S ON’ PAGE. ONE DAY; THAT’S THE FASTEST THEY HAVE EVER TAKEN TO REACT TO MY BLOG! BUT I’LL LET THIS POST STAY AS A RECORD OF WHAT HAD HAPPENED (OR ELSE NO ONE WOULD EVER KNOW).

Again, I spot poor housekeeping at National Heritage Board’s websites. Click here (and then click on ‘What’s On’ near the top, between ‘About Us’ and ‘Museum’), and you will see on this main NHB website one version of Asian Civilisations Museum’s logo (one with a cartoonish façade of the building with its watery reflection). 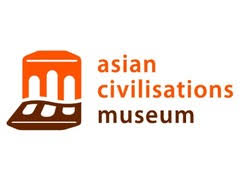 But click here and you will see on ACM’s home page that they have a slicker logo sans wobbly reflection.

The watery logo, if I am not wrong is the older one (and it also pops up more on google image search), and to me appears to make ACM seem more ‘fun, quirky’ (and also more apt as it rightly shows its proximity to the S’pore river). The blocky logo on ACM’s home page should be the newer one, and seems to be the museum’s attempt to look more ‘serious, contemporary’. Note that on the main National Heritage Board website, both ACM logos appear.

Ok, this ‘wrong logos’ issue may appear trivial, but to me it is reflective (pun intended) of a possible larger malaise within National Heritage Board: Since NHB appears to have an overarching Headquarters (where the CEO, corporate services, IT, general outreach etc are located and generally have some oversight over the rest), and many seemingly generally-autonomous museums and institutions, the wrong logos I spotted may be symptomatic of a lack of communication between HQ and its subsidiaries. (And also a reminder that I have spotted a few website errors also in past posts). Surely the HQ person who oversees the main website should have a keener eye, since loads of money must be spent on its (and also his/her) upkeep? If not, I am sure the Director of ACM and its many staff would have spotted this error right away (unless the ACM staff hardly visit the main NHB website?)? If the NHB main website can get the logo of one of its larger museums wrong, one must wonder what else have gone wrong within this large organisation that the public are not aware of?

As usual, let’s see how long it will take for this error to be rectified.

3 responses to “Asian Civilisations Museum and its two logos”